HATE ME when thou wilt… : Nico and the Navigators take on this famous poetry and present it as object theatre together with the Puppentheater Halle.

HATE ME when thou wilt…

Nico and the Navigators stage ten of Shakespeare’s 154 sonnets together with the British narrator and longtime Navigator Charles Adrian Gillott, the sound artist and musician Sebastian Herzfeld and actors from the Puppentheater Halle to create an intimate production.

Out of the poems emerge stories and when the words become ambiguous is when the Navigators metaphoric and musical fantasy unfolds in all its diversity. This production celebrates Shakespeare’s discordant and strong texts, which can be more relevant than a lot of today’s contemporary lyric. They deal with nothing simpler then the subjects as love, sex, success, loss, desire and immortality.

Nicola Hümpel utilizes the challenge of translation and has the characters exchange bilingual dialogues. Rather than working with surtitles she allows the different figures to use both languages and finds playful ways to create German versions of the English originals. 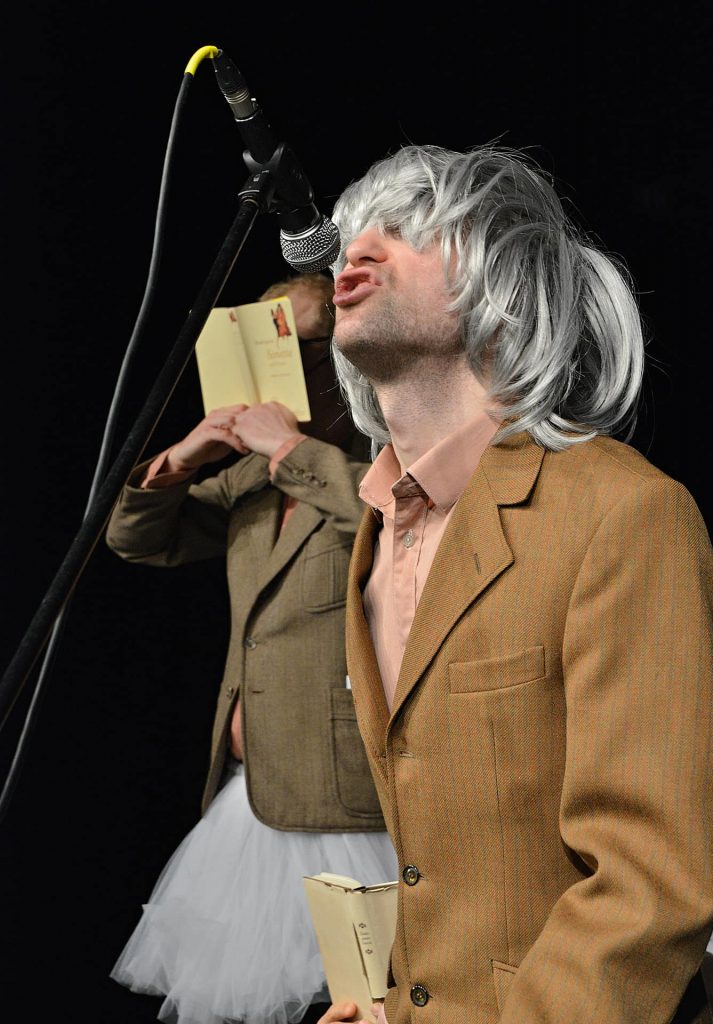 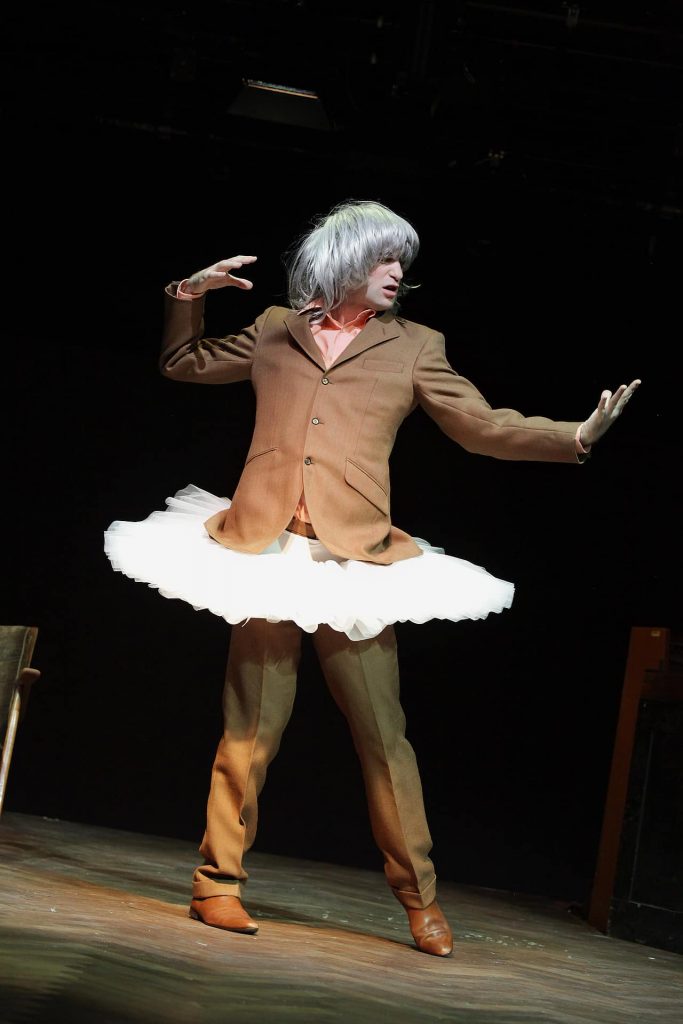 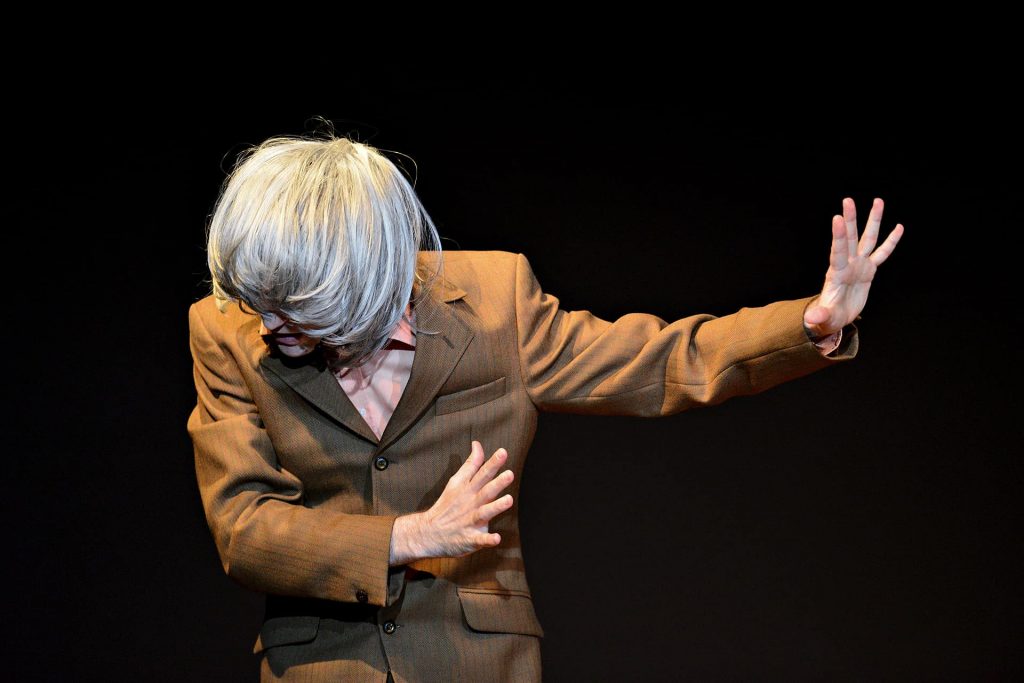 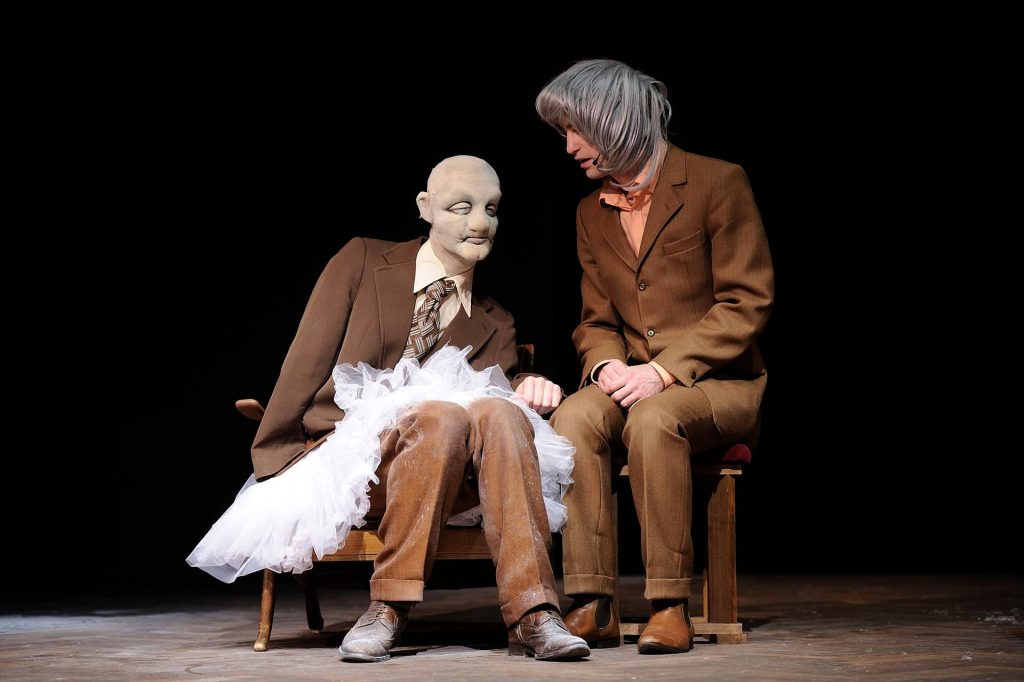 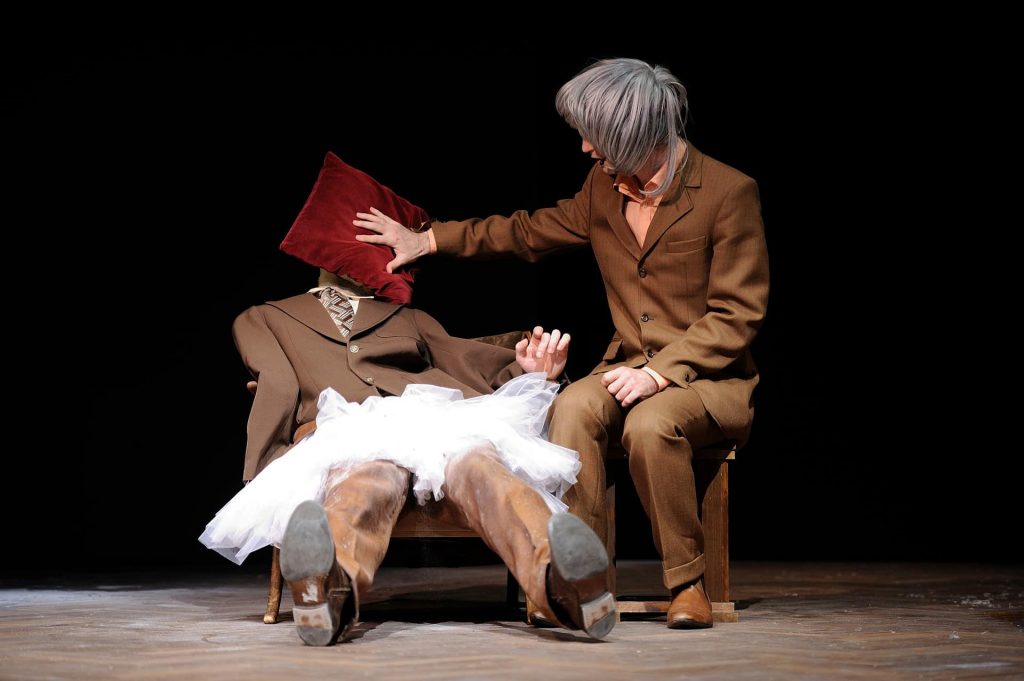 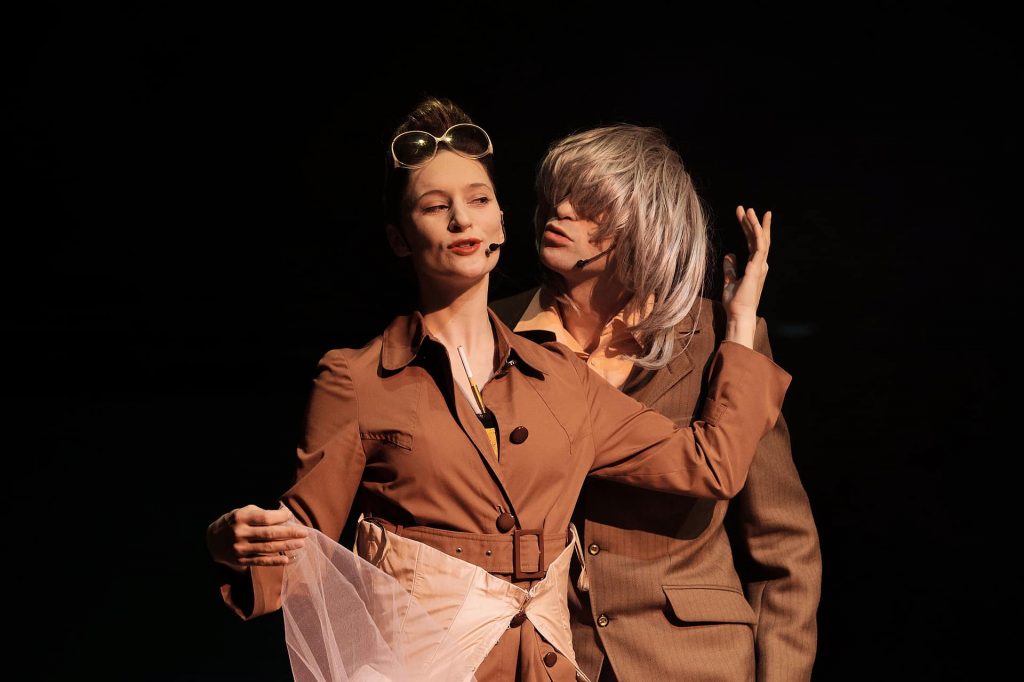 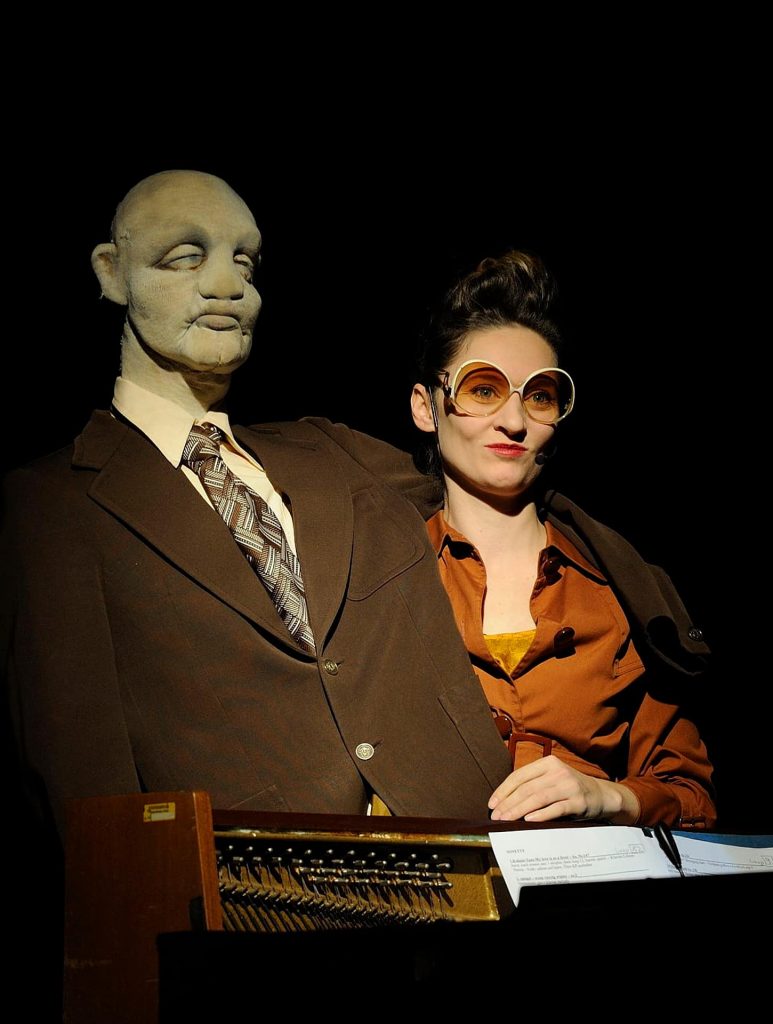 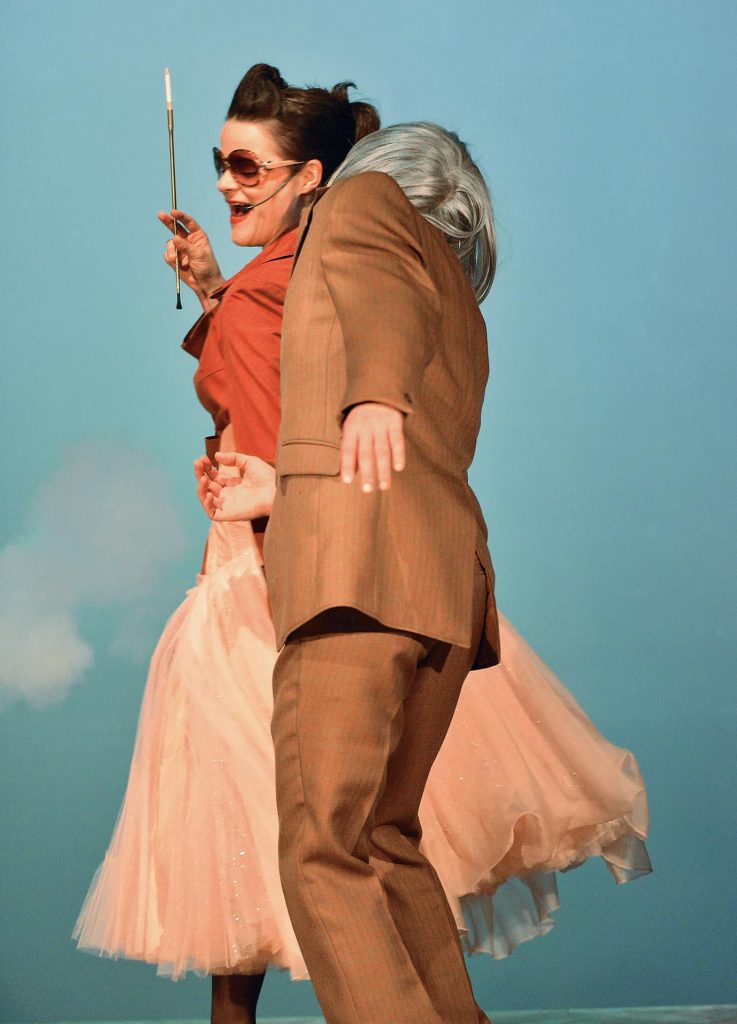 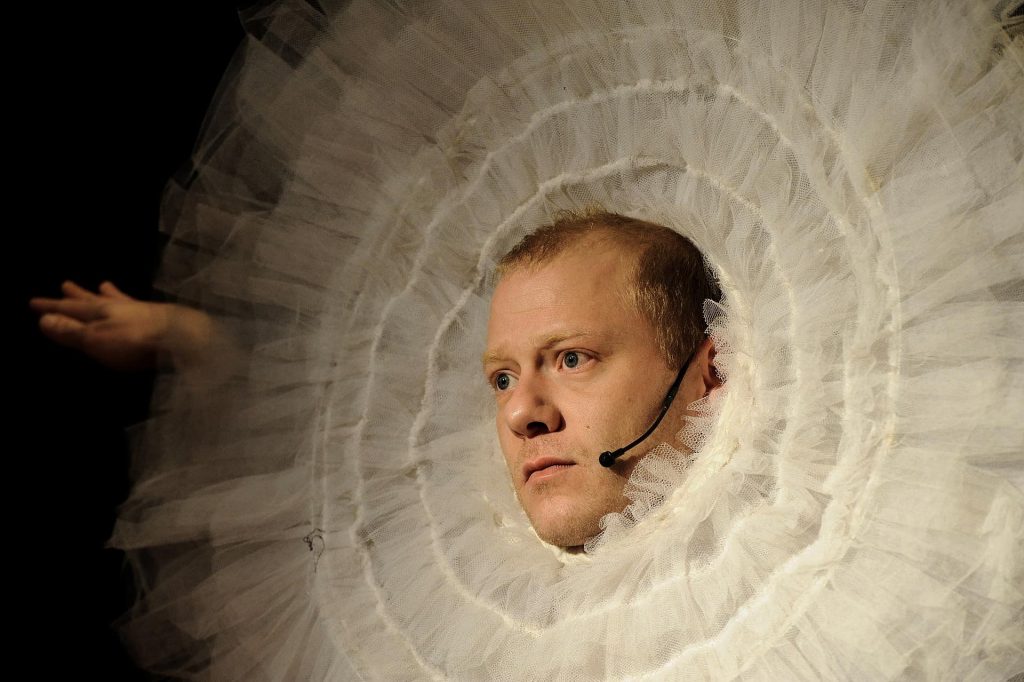 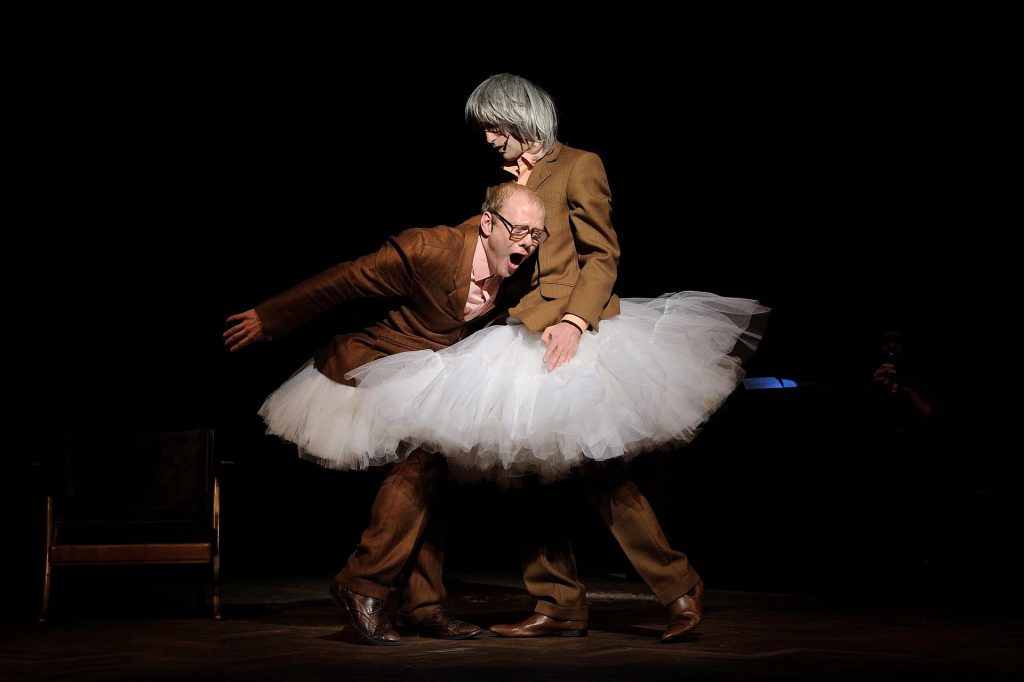 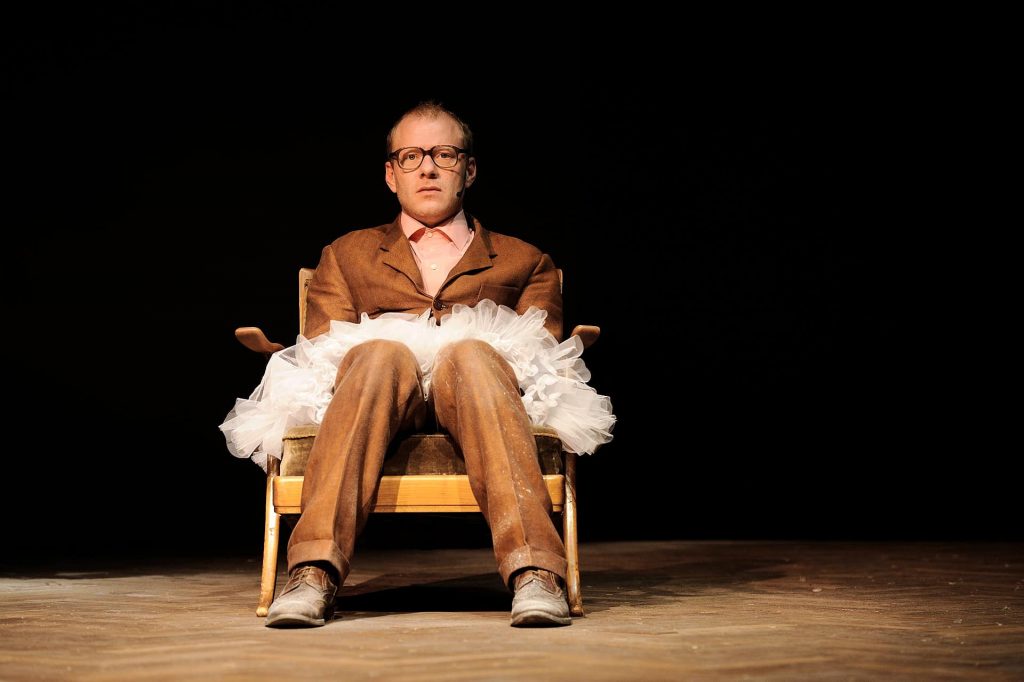 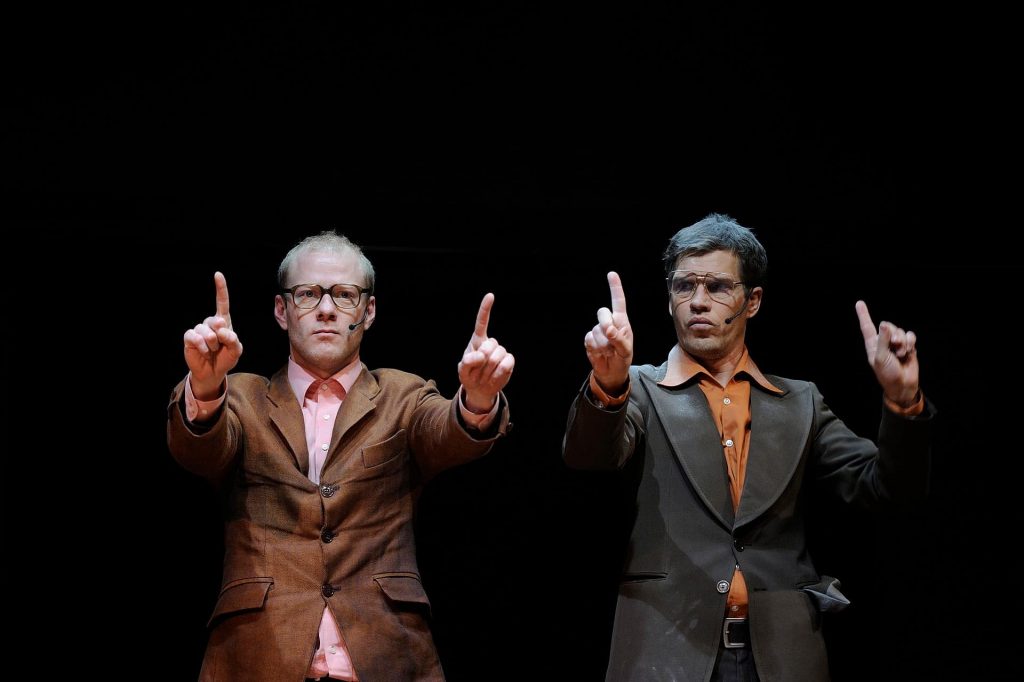 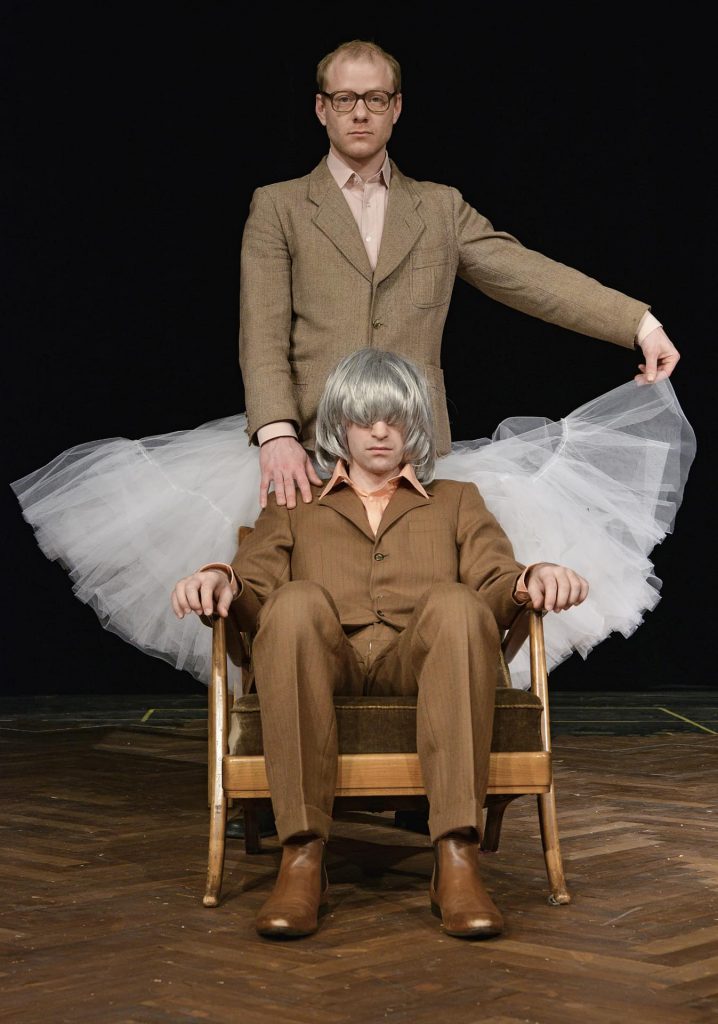 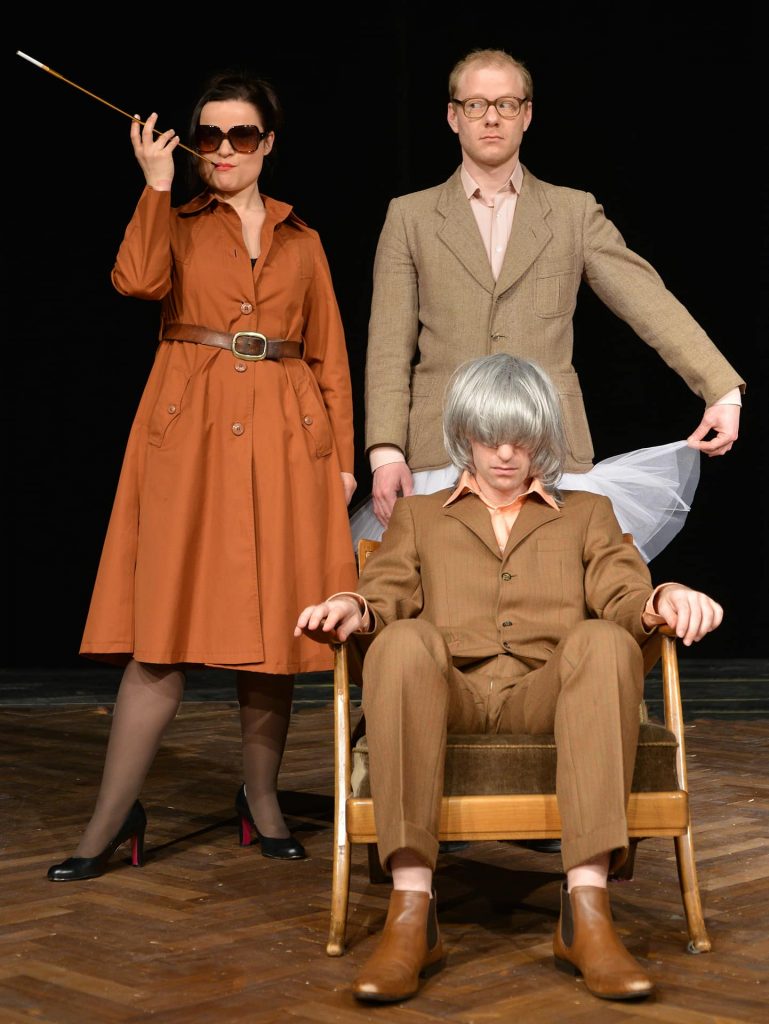 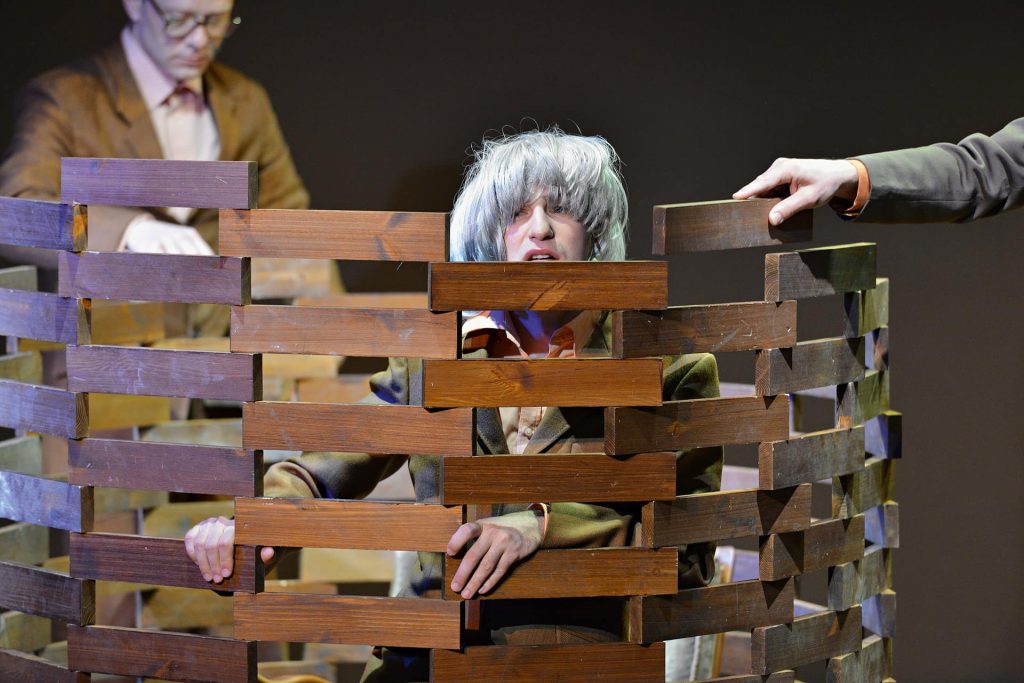 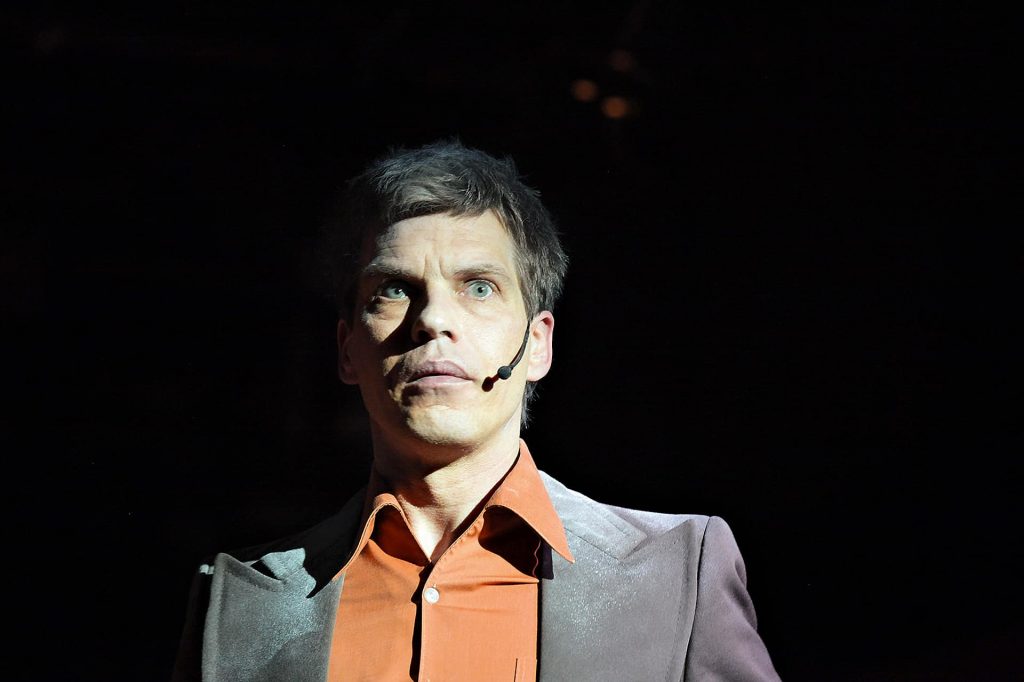 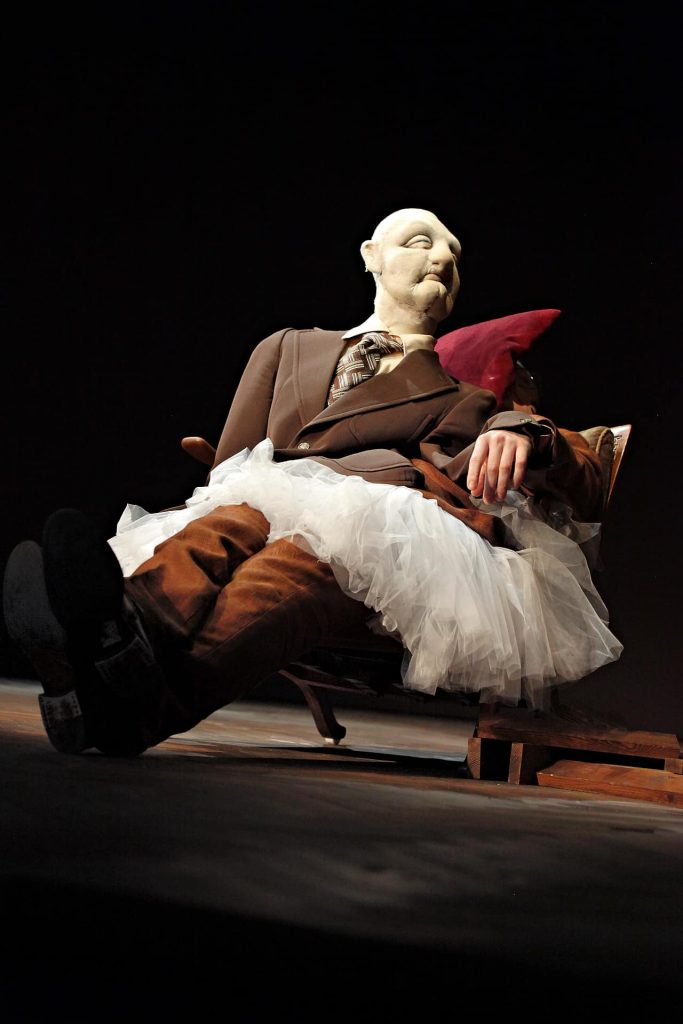 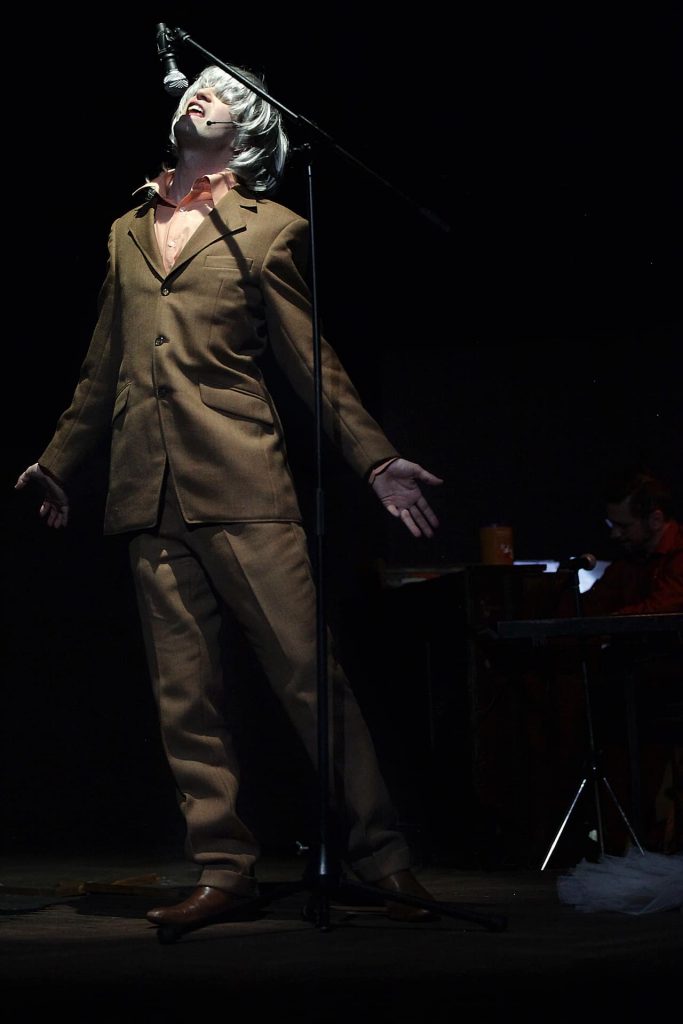 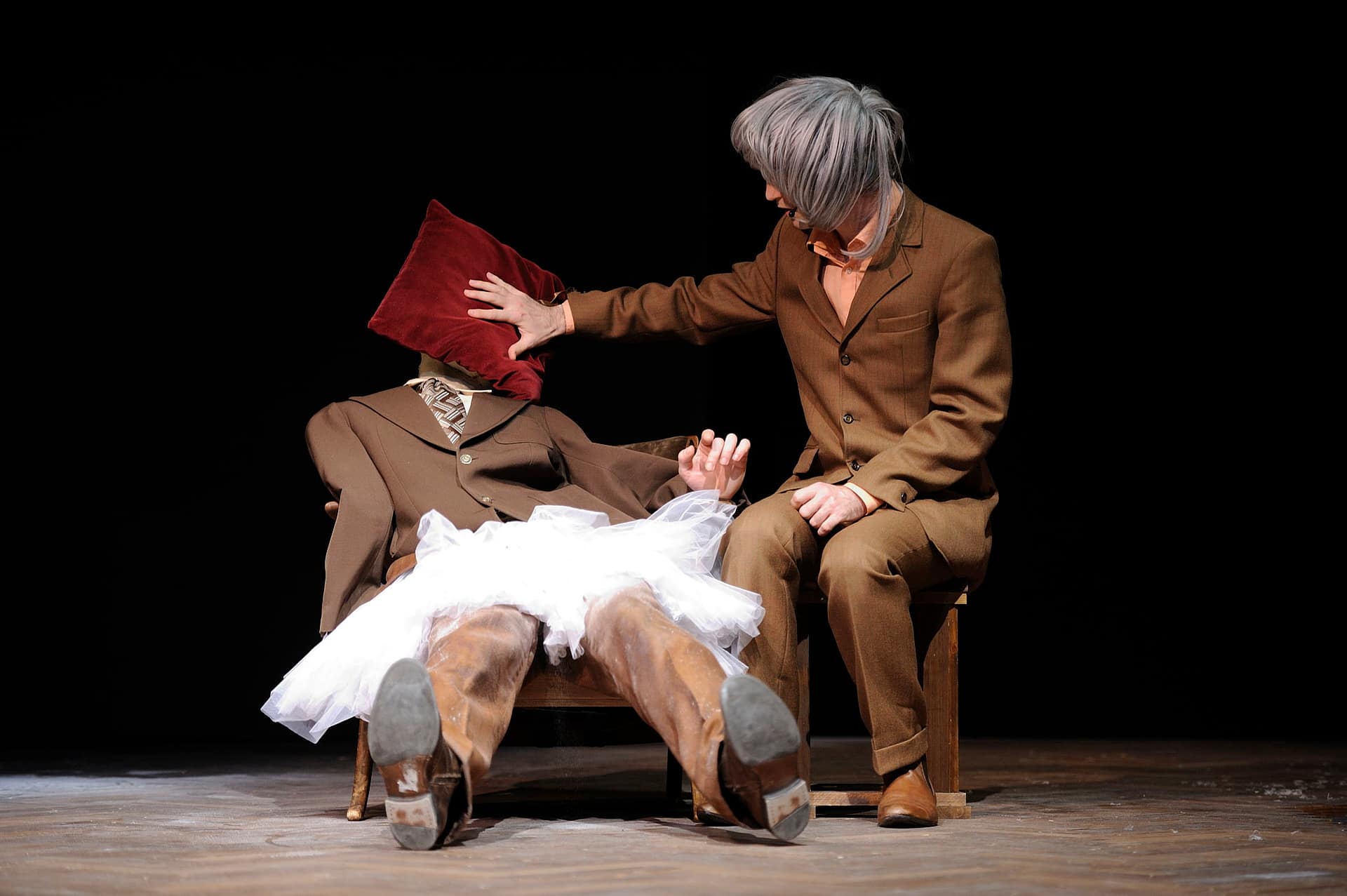 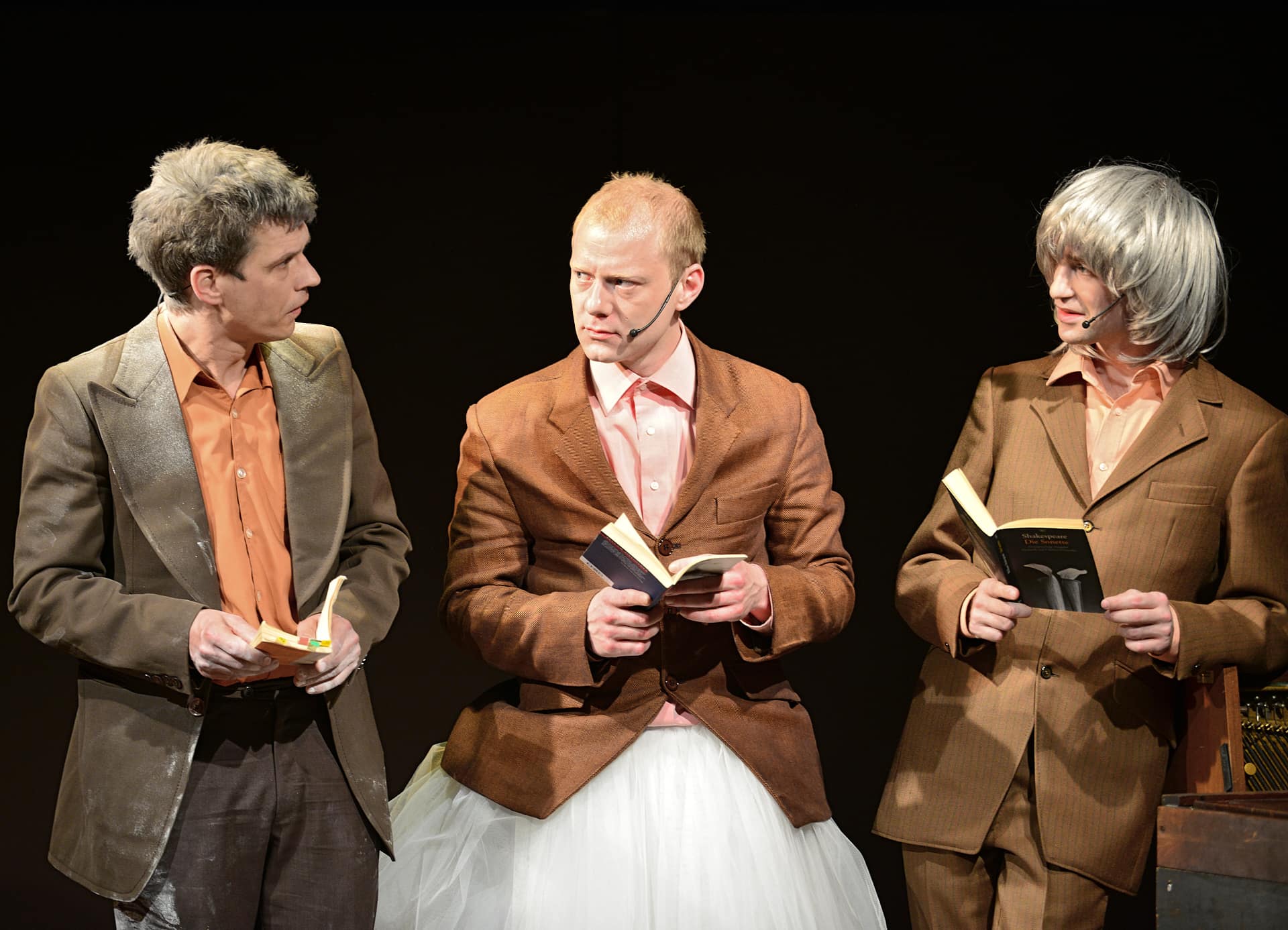 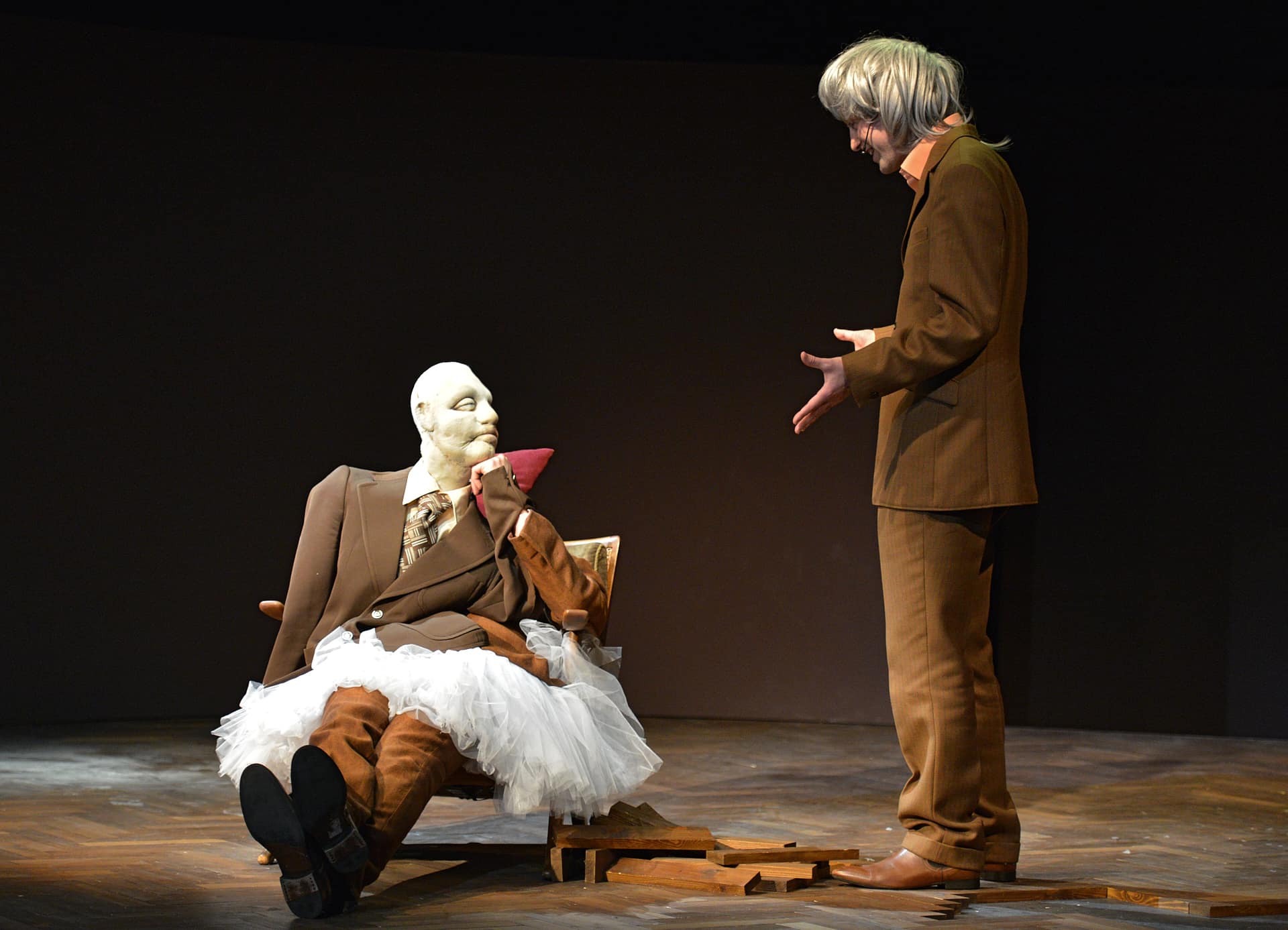 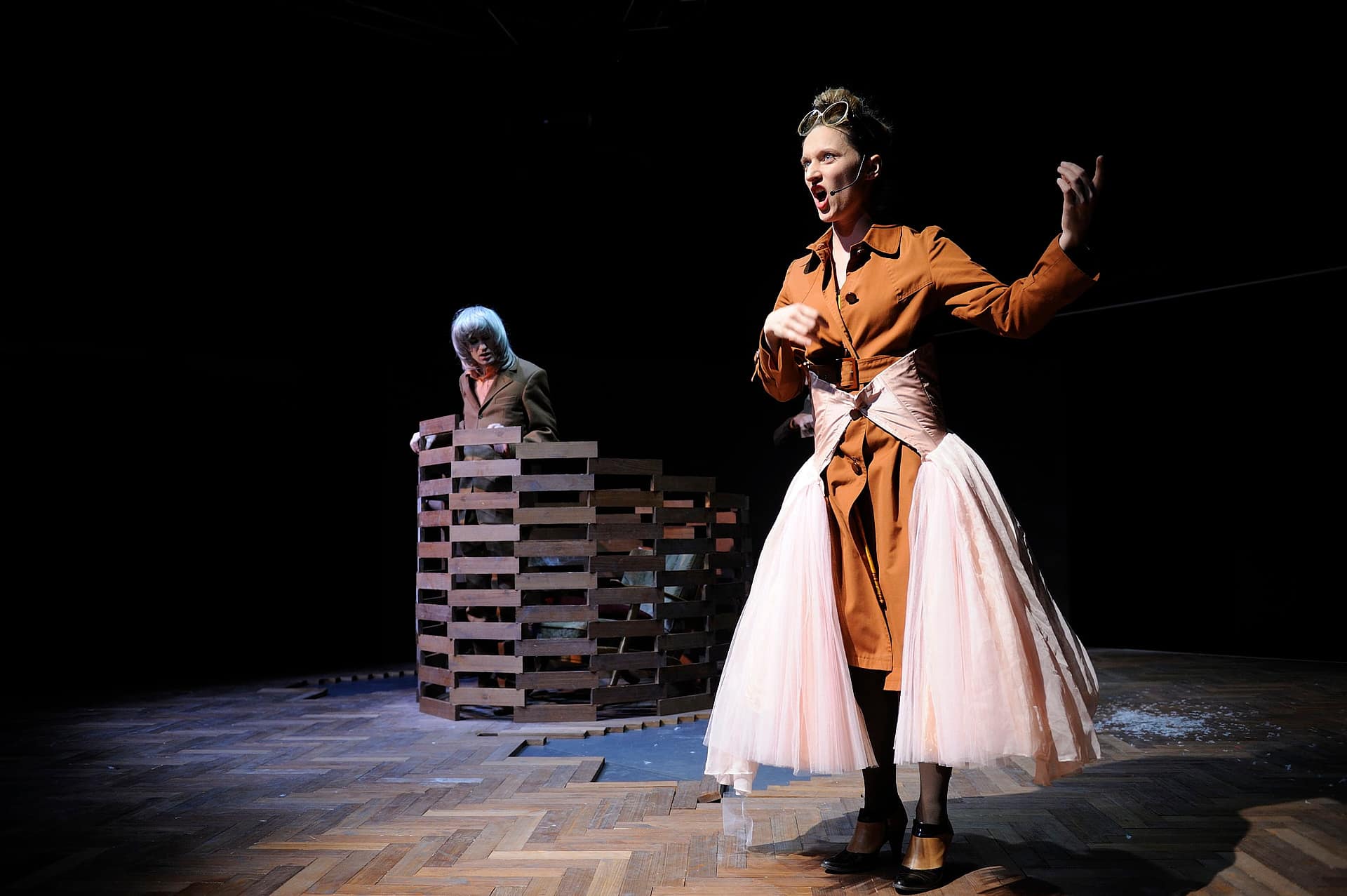 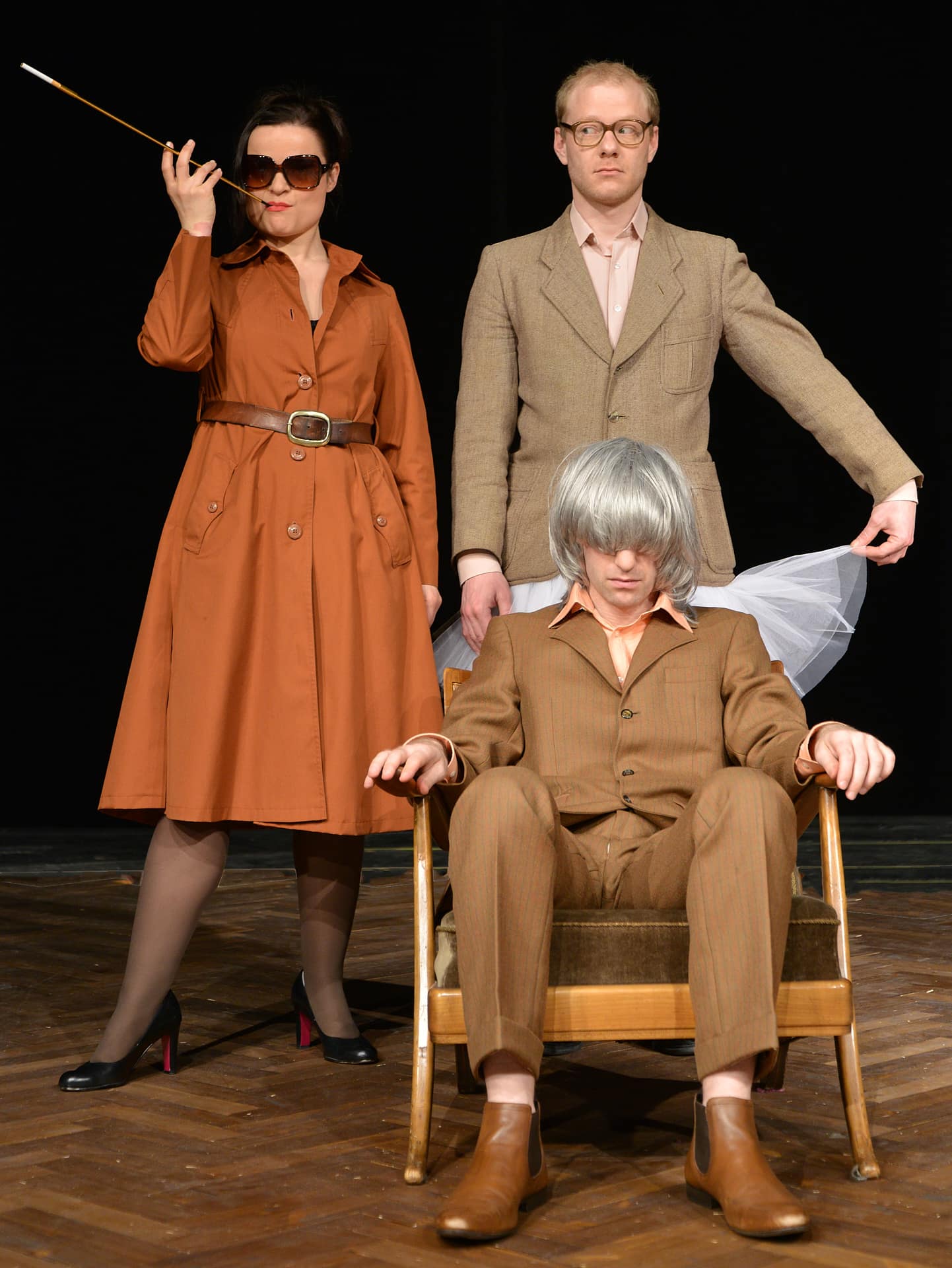 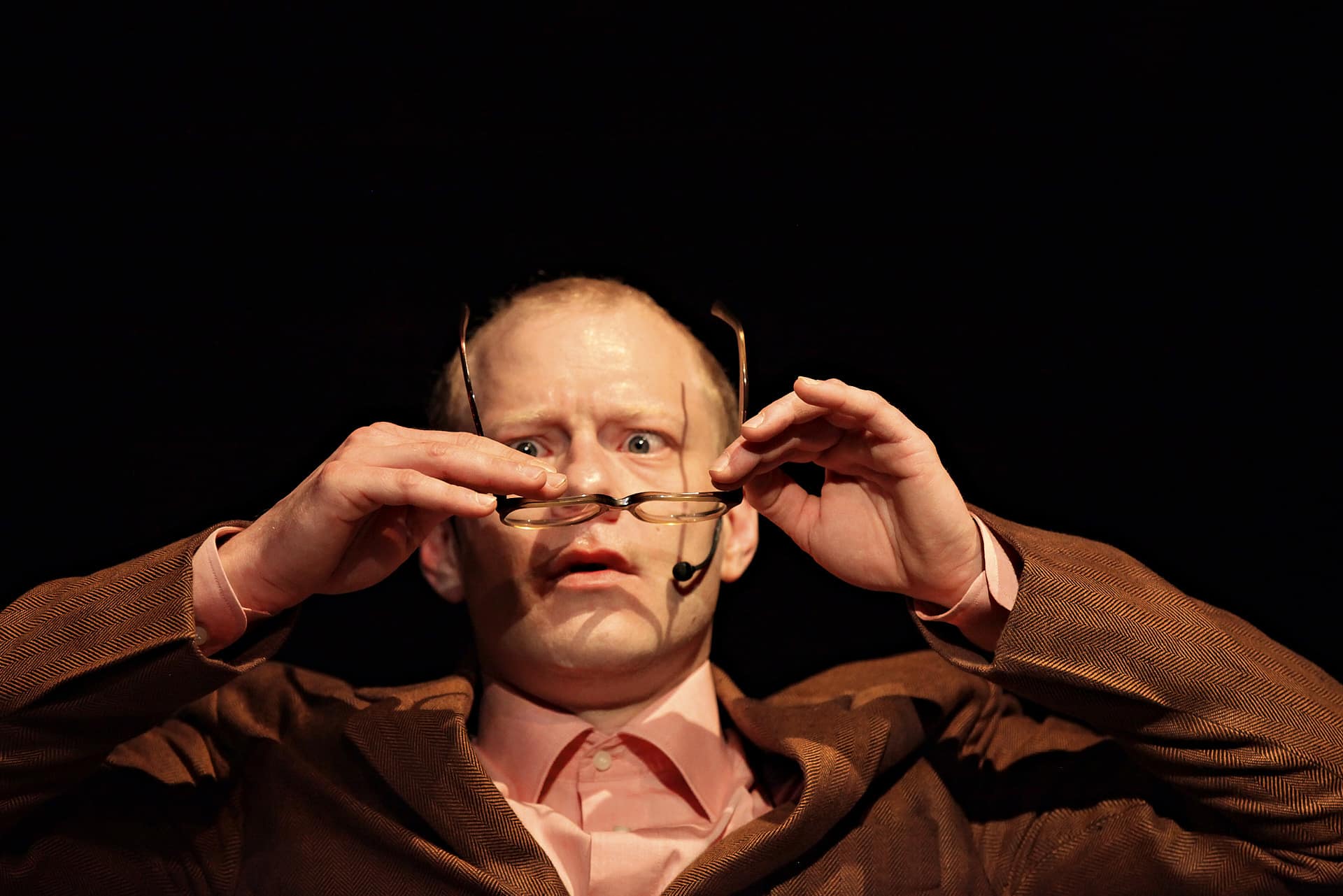 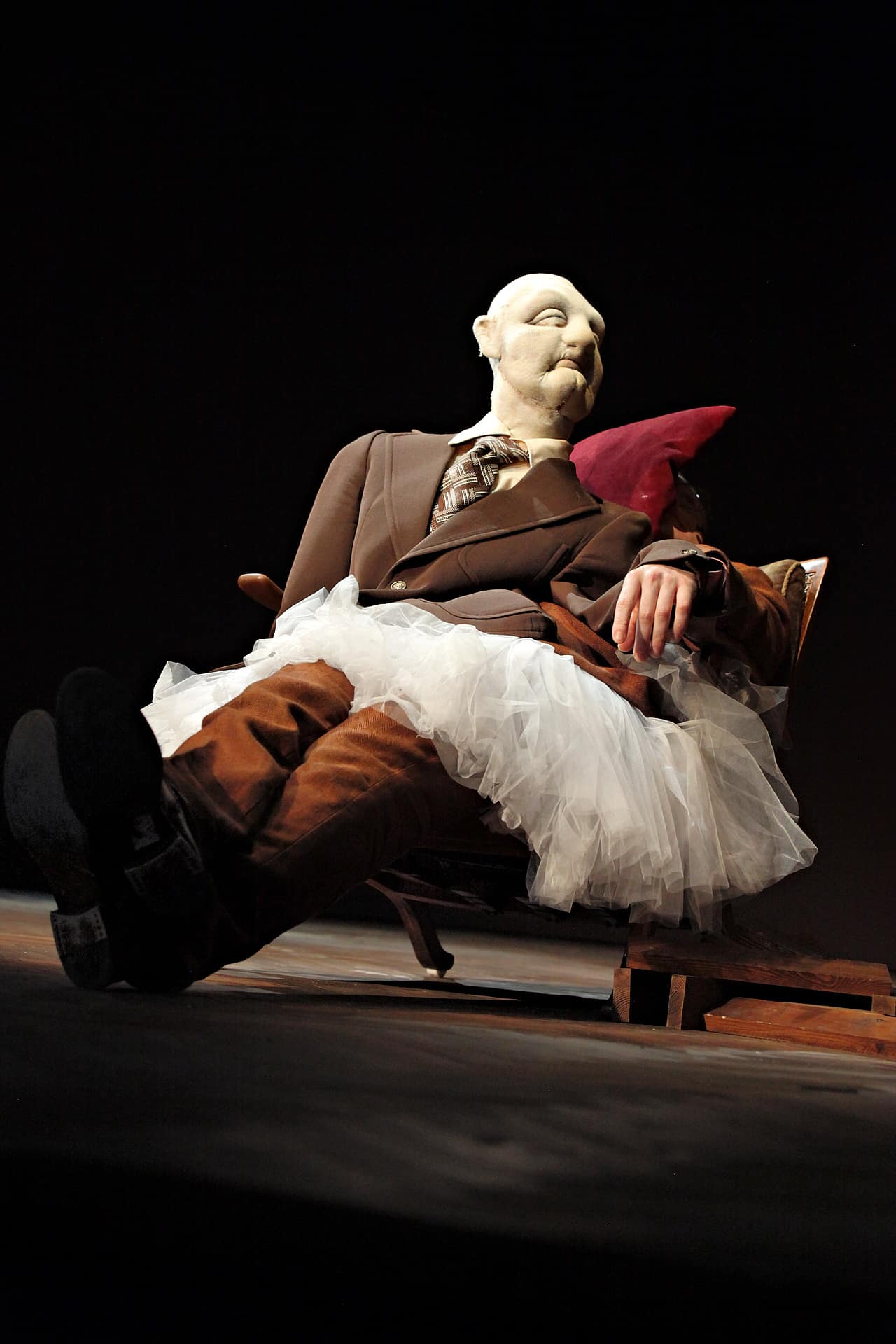 …admittedly so ravishingly funny that Shakespeare’s stories in poems about love, sex, and passions become a glorious swan song to Western poetry.

...The Puppet Theater Halle also came along linguistically experimental, but in the most beautiful Oxford English, elegiacly declaiming Shakespeare's Sonnets in a balletic tutu, admittedly so ravishingly funny that Shakespeare's stories in poems about love, sex and passions become a glorious swan song to occidental poetry.

Just when the ensemble gets going and creates the strongest scenes, e.g. the walling up of an actor with blocks torn out of the parquet, with the greatest joy of playing, the entertaining evening is unfortunately already over after 70 minutes.

Of Shakespeare's 154 sonnets, I understood only 4... I bookmarked those in the volume. With all the others I felt like back in the Abitur, when I was supposed to interpret a sonnet and understood nothing. I wrote: The text is incomprehensible, nebulous and bumpy - and got a 6″ for it, sighs a frustrated actor on the stage of the Radialsystem. In their first co-production with the Puppentheater Halle/Saale, the group Nico and the Navigators, known for their innovative productions, attempted an approach to the famous poems, which are among the most difficult works of world literature to translate. How unfathomable some passages are is demonstrated by the actors in one scene, when they place several strongly differing translations next to each other. Thus it remains a gradual approximation and circumnavigation. Native speaker Charles Adrian Gillott recites selected pieces in the original, while his German colleagues or the grouchy old puppet who keeps interjecting, follow up with the translated version. Just when the ensemble gets going and creates the strongest scenes, e.g. the walling up of an actor with blocks torn out of the parquet, with the greatest joy of playing, the entertaining evening is unfortunately already over after 70 minutes.

Hümpel [uses the artistic freedom] for a very personal excursion into the poet’s world, seeking to get behind his motives and to bring what is meant to be read to the theater stage. Racy, marionette-like mechanical movements illustrate the often rapturous diction of the poems in this stimulating collaboration with the Puppentheater Halle.

She can even find humor in Shakespeare's sonnets, which are drunk with love and sorrow. Nicola Hümpel - she is the Nico of the Navigators - confronts the poetry, written before 1609 and compressed to the extreme, among other things with a man from today who, as a high school graduate, had failed miserably in his sonnet interpretation: "Nebulously incomprehensible," he had written at the time. Now he is an environmentalist. The more he understands the sonnets, the more it goes downhill with the mixed forest, up to erosion, abrasion of cliffs. Shakespeare was quite a woodsman back then, he thinks. Then he continues talking to Sebastian Herzfeld's soft live music, which adds its sound to the sound of the words. This is one of the images with which the director Nicola Hümpel nestles up to or opposes the highly artificial art products of the master who once wrote the 154 sonnets. She brings ten of them parable-like onto the scene of the Theater Aufbau Kreuzberg, which is encompassed by a background arch. Adrian Gillott, a Navigator veteran, enters shyly. And says the poet drank and cried a lot while writing. He puts on a wig and slips into his part. He has an easy time with the English originals, but they are difficult to understand for today's listeners. So his fellow actors Nils Dreschke and Sebastian Fortak have the role of playfully providing the translations. About 300 translators have tried their hand at the linguistically dense laments about the loss of beauty, youth, love partners. They all sound different - but what does the lyricist really mean with his words? This, too, is the subject of the 75-minute evening. It is certain that 126 of the sonnets are addressed to a young man, real person or poetic fiction. Hümpel therefore has her men act with tutus over their suit trousers. Although this ballerina prop was invented much later, it represents the androgyny of the situation and at the same time the tradition of Elizabethan theater to have female roles played by young men. While "Shakespeare" Gillot goes into a feverish rage about love and his listener shapes the tutu into the fashionable collar of the time, the poet defends himself, saying that there are just too few words in the German language for accurate translations. His lament about aging and the appeal to reproduce oneself in the child is "spoken" by the doll of an old man. After it first dies, then comes back to life, this doll intrusively approaches a woman, the singer Julla von Landsberg. In another scene it becomes the grotesque upper part of a human lower part: Shakespeare screams into its deafened ear his lament for a lost love. Then the director becomes more explicit and places a man at the side of the wailing man, who kisses his hand and sinks down against him as he breathes the titular sonnet 90: "Hate me when thou wilt..." - hate me when thou wilt, but leave me not. But Hümpel would not be the subtle director if she did not break the pathos of loss ironically. A punch in the genitals bends the one who claims that no greater pain than that loss can hit him. When Shakespeare increasingly writes himself in pain, sees himself in sonnet 90 as a slave of the beloved, he is built into a paket piece, the singer accompanies his suffering with vocalizations. He frees himself from the dungeon, but once he has acquired a taste for it, he can hardly be stopped. Like a rock star, musically rhythmic, he sounds lyricism into a microphone next to the rubble, even when the music falls silent, the sound is turned off, the lights go out. Just Shakepeare forever. Whether Shakespeare was as vain as suggested here belongs to the realm of artistic freedom. Hümpel uses this freedom for a very personal excursion into the world of the poet, tries to get behind his motives and to bring what is meant to be read to the theater stage. Racy, marionette-like mechanical movements illustrate the often distant diction of the poems in this stimulating cooperation with the Puppentheater Halle.

Nicola Hümpel has selected ten of the 154 sonnets. For those alone there are five different translators. This Halle puppet theatre and Nico and the Navigators coproduction both charms and challenges the audience with its celebration of bilingualism. It doesn’t use surtitles, but rather the German version of the English original is also present as a kind of dialogue or echo. A dapper Adrian Gillot uses something like word choreography to slip in the English version.

Nicola Hümpel brings Shakespeare's sonnets to the stage. There is never any need to justify staging William Shakespeare. In special cases even his famous sonnets can be brought to the stage. This strictly structured lyric poetry shares the theatrical format of the great Englishman's plays. His sonnets count among the works that have been translated into more languages than any other. Nicola Hümpel has selected ten of the 154 sonnets. For those alone there are five different translators. This Halle puppet theatre and Nico and the Navigators coproduction both charms and challenges the audience with its celebration of bilingualism. It doesn't use surtitles, but rather the German version of the English original is also present as a kind of dialogue or echo. A dapper Adrian Gillot uses something like word choreography to slip in the English version. In a shaggy grey wig and with a penetrating voice he delivers a performance that is full of feeling. And then along comes Sebastan Fortak, wearing a white tutu over a run-of-the-mill brown suit, to brood over the whole thing in German. Sometimes a wonderful half-body puppet of an old man makes an appearance: a true master of the art of lip-syncing and even able stick to his tongue out. Otherwise it is people who populate Oliver Proske's sparse Shakespearean stage. A prison tower can be constructed from its hardwood flooring when sonnet 57 reads "Being your slave, what should I do?". All this produces a strange yet intimate atmosphere which is due in large part to the sound, provided live by Sebastian Herzfeld, which does however tend to over-dominate at the point of crescendo. Yet there is a rest here too, only not one of silence like in Hamlet but one of mystery, as to whom the “I” of the poems is actually addressing. Perhaps the tears we imagine the poet crying made the lines he was writing run. In any case that's what Nils Dreschke speculates, in his lawyer-like representation of the readers of today. He has marked the sonnets that he was able to understand at once. That there are only three of them is a gag with a deeper meaning. And a comfort. In that they are not exactly easy to understand. Not in English or in German. But Nicola Hümpel has a sure sense of timing when it comes to granting respite, stepping outside of things or sticking her oar in. As she does via the wonderful Steffi König. When she looks into the abyss of the soul, wrenched apart in ten sonnets, she doesn't react with the melancholy of her colleagues, rather she carries on with her weird Nina-Hagen-like voice, explosive presence and infernal laughter. Three years ago at the Berliner Ensemble, Robert Wilson and Rufus Wainwright gave us a theatrical interpretation of the sonnets that was rich with images, and in so doing brought the inner world to the exterior. In Halle they're trying it the other way around. Here you should be able to hear the scratching of the quill on paper. And it can be heard. The sonnets are printed in the programme. In English and in German. If you read them beforehand you'll have an easier time of it on the night. And if you don't, you'll be saving the pleasure for afterwards, when you'll be able to pore over them and let the words linger on in your mind.